Athough Bandon Hockey Club existed prior to the 1970s, there was gap of many years before it was re-established. We are doing our best to piece together the history from that time but for now we have focused on the re-establishment of the Club. Of course if anyone can help us compiling the early history then please get in contact.

In September 1974 Stan Fuller of C. of I. entered the Bandon Grammar School XI in the Third Division of the Munster Senior League. The team captain was George Bradfield and the rest of the team included Peter Earle, Robert Rohu(GK), Denis Pritchard, Cecil Hoffman, John Coombes, Roy Buttimer, Harry Topham, Kieran Molloy, Leslie Sweetnam, Ivan Coombes and Robert Helen. The team was managed by Brian Price who was the Business Studies teacher in the school. Matches were to be played on Saturdays but as rugby had priority over hockey quite a few points were lost due to the team being unable to play.

Recent past pupils such as Robert Arnopp, Samie Beamish and John Butttimer were taken on to strengthen the team. However, by the end of the season it was decided the school could not continue to play hockey at senior men’s level but if there was enough interest among past pupils a club could be formed. Brian Price said he would give a hand providing the club would open to all denominations both male and female.

The following officers were elected at the inaugural meeting: Hon. Sec. Robert Arnopp and Hon Treas. Brian Price. The club received a grant of £75 from the IHU in its first year which was placed in a deposit account. The treasurer reported at the end of the season that only 16 players out of 30 had paid their subscriptions of £3 each. Affiliation to the IHU Munster Branch cost £24.60 and cup entry fees were £6.

At the second AGM held in the Allin Institute on June 11th 1976 it was decided to enter two teams in the men’s Munster Senior League, Division 3 and a ladies section of the club was also formed comprising of 23 members, including June Skuse, Hon. Secretary, and Maria McLaughlin who captained the Minor ‘B’ team that year.

At the beginning of the the 1977/78 season the ladies’ section amalgamated with the men’s and entered the minor ‘A’ league and two teams in the Cup.

Pearl Sweetnam was elected President for 1981/82 as Brian Price stepped down due to family commitments. That season the ladies’ minor ‘A’ team, led by Siobhan O’Leary, won their league, gaining promotion to the Munster Ladies Intermediate league. In the following season the ladies 2nd team played the first ever Munster Junior League match to be played on a Sunday (September 26th 1982) away to Harlequins drawing 1-1.

The Ladies, captained by Linda Perrott, had a very successful season in 1986/87, winning a treble, the Minor ‘B’ League and Cup, and the Cork Cup. In the same season the men’s 2nds won the Munster Division Three League, captained by Fergus Appelbe.

History from the 1990s and beyond to follow soon. Anyone with memories to share please let us know…..

Can you name the players?

I’d love to say there’s a prize but unless someone would like to donate one then there isnt! It would still be great to see a few people have a go anyway though. Write your answers in the comment box below…. 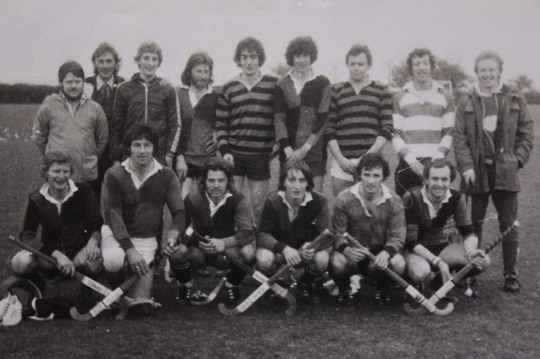